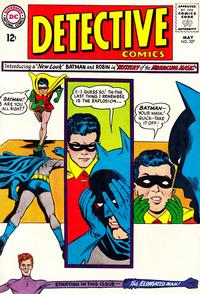 Appearing in "The Mystery of the Menacing Mask!"Edit

Synopsis for "The Mystery of the Menacing Mask!"Edit

A heated debate over Gotham Village has begun, while anti-crime groups want the area of Gotham City destroyed and rebuilt, there are those who are asking for conservation of the location because it's destruction would lead to many being homeless and many businesses going under.

As part of the committee, Bruce Wayne and his ward Dick Grayson decide to take a walk through Gotham Village where they are confronted by Linda Greene who asks Wayne to help preserve Gotham Village. She tells how she and her fiancé James Packer grew up there and will be married. But she explains that she is worried because he has been away from home at odd hours and also she found a map. When seeing a circled x Batman and Robin recall an earlier evening when they were doused with an isotope that put the same mark on their foreheads. Learning what kind of isotope it was and who in Gotham last ordered it they followed their lead to criminal Frank Fenton who flaunts stolen goods in their faces. Batman and Robin are unable to stop Fenton because the isotope they were exposed too allows Fenton to paralyze them until he can make his escape.

Finishing their recollection Linda spots her fiancé, and Bruce and Dick offer to speak to him on her behalf, but instead change to Batman and Robin to pursue him. They end up finding a secret tunnel way to the criminal organization which runs in the Gotham Village area. When Fenton tries to paralyze them again, he soon finds it doesn't work and Batman and Robin manage to round up the whole crowd.

When the police arrive, Batman notices the ring leader is wearing a fake mask and removes it to reveal that he is Roland Meacham, the head of the preservation committee of Gotham Village. When asked how they managed to counteract the effect of the isotope Batman then reveals that they used lead shielding in order to block the commands from Fenton and were able to stop all the crooks.

Later, back in their civilian guises Bruce and Dick see that Linda and James have patched things up and bring them news that the committee had decided to preserve Gotham Village after all.

Appearing in "Ten Miles to Nowhere!"Edit

Synopsis for "Ten Miles to Nowhere!"Edit

Ralph and Sue are informed at the US/Canadian border that some jewel thieves have stolen diamonds in Montreal worth two million dollars but Ralph is more concerned that the guard has never heard of him. His frustration increases when they check into the Star-Bright Motel and the owner likewise has never heard of him. The next morning Ralph checks the odometer on his car (as he always does) and realizes it's 10 miles over what it was when they parked. They drive about a mile away, in case they're being watched, and Ralph changes to his Elongated Man costume and returns to the Motel while Sue drives on to go shopping. Ralph finds and follows tire tracks which take him to an isolated farmhouse and eavesdrops on the occupants who are discussing their diamond theft. Overhearing the Dibnys discuss their travel plans in a restaurant as well as the fact that their car was currently being serviced at a garage, the thieves spot-welded a box containing the diamonds to the bottom of the Dibny car and allowed them to transport the jewels across the border. Following them, they waited for the Dibnys to go to sleep, then drove the car to the farmhouse to retrieve the jewels and, after returning the car, decided to wait in the farmhouse. Elongated Man takes the criminals down and drives them (in the villains' car) to the closest police station where Ralph, again, is frustrated that nobody knows him. He finds Sue as people around him seem to recognize him only for Ralph to show that he's pinned a paper announcing his identity to the back of his jacket.

Retrieved from "https://heykidscomics.fandom.com/wiki/Detective_Comics_Vol_1_327?oldid=1512115"
Community content is available under CC-BY-SA unless otherwise noted.