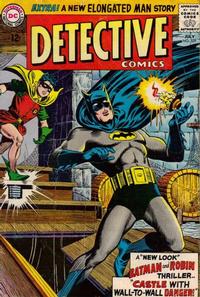 Appearing in "Castle With Wall-To-Wall Danger!"Edit

Synopsis for "Castle With Wall-To-Wall Danger!"Edit

Bruce Wayne and Dick Grayson were enjoying breakfast when they are interrupted by a call on the Batphone. Commissioner Gordon has them look at the latest Lifestyle magazine which features a photo of Albert Maunch, who resembles a crook named Frank Prangel, a crook which escaped Batman's capture. As Batman and Robin, they fly to England to take Maunch in, however when they arrive they realize it was a case of mistaken identity as Maunch was not the man they were looking for but had a family resemblance. Maunch invites them to stay for dinner, and Batman and Robin soon stumble upon a series of traps and are attacked by thugs while staying at the castle. They soon learn the truth and find Frank Prangel in a secret room threatening Albert. Frank is knocked out, and the story behind everything is revealed to by Albert: Frank Prangel is Albert's brother Vincent, who went to America to be a crook. Albert however learned that the castle that he now lives in was where a number of Nazi's who escaped capture during World War 2 came to hide some of their loot. When Vincent learned this he locked up Albert's wife and child and forced him into loyaltee.

With Vincent captured and locked behind bars, Albert was free to find the hidden treasure and report it to the world.

Appearing in "Puzzle of the Purple Pony!"Edit

Synopsis for "Puzzle of the Purple Pony!"Edit

It's 10 a.m. and Ralph and Sue are heading through an open plain towards Cactus City where a rodeo will take place in four hours. They stop along the road to watch a wild horse and a cowboy in a jeep who catches it. The cowboy begins painting the horse purple. Ralph is uncharacteristically disinterested in this but Sue is brimming with curiosity and goes to confront the cowboy who apologetically refuses to explain his actions. Sue returns to Ralph and kicks him out of the car and orders him to solve the mystery while she drives ahead to get tickets to the rodeo. Ralph, as Elongated Man, secretly follows the cowboy (Jimmy Crowder) to a schoolhouse where his lady friend, Nora, confronts him over his actions. Jimmy tells her that he's on his way to make a fortune and Nora joins him with Elongated Man continuing to follow. All three are unaware that three other cowboys are secretly following. They go to the Lost Frenchman Mine area where the three other cowboys attempt to kill Elongated Man in a rockslide but he escapes. Jimmy and Nora search for over an hour but find no trace of the hidden mine when the purple horse uncovers a possible entrance. Jimmy finds gold nuggets but the three criminals hold Jimmy and Nora at gunpoint while one of them, Pete, rides towards town to officially file a claim thus making them the official owners of the gold. Elongated Man takes the three men down and, as payment, Elongated Man asks Jimmy to explain why he painted the horse purple. Jimmy tells Elongated Man that he once saved the life of an Indian Medicine Man who, as payment, offered a prophecy stating that the mine would be found by a man, a woman and a purple pony and that no one else must know of the prophecy lest it fail to come true. Elongated Man meets Sue in Cactus City and explains the mystery.

Retrieved from "https://heykidscomics.fandom.com/wiki/Detective_Comics_Vol_1_329?oldid=1378405"
Community content is available under CC-BY-SA unless otherwise noted.