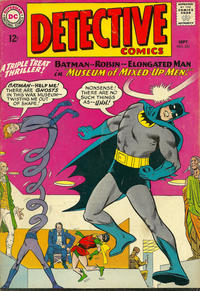 Appearing in "Museum of Mixed-Up Men!"Edit

Synopsis for "Museum of Mixed-Up Men!"Edit

While touring the Gotham Wax Museum, Bruce Wayne pays for a souvenir photograph but gets more than he bargain for: the camera causes his face to change into somebody else and his memory is taken, as well as all his forms of identity. Tossed into the street, the amnesiac Bruce Wayne wanders trying to make sense of his sitation.

Meanwhile, somebody posing as Bruce Wayne, withdraws half a million dollars from his bank.

That night as Aunt Harriette serves supper to Dick Grayson, both begin to wonder where Bruce is when there is a call from the Batphone. Making an excuse to leave the table and go down to the Batcave, Robin answers the phone to be informed that there is a jewel robbery in progress. Going by himself in the Batmobile, he passes by Bruce who remembers who he is and while Robin is overpowered by the robbers changes into his Batman costume (left in the Batmobile) and lends a helping hand. Afterwards, Batman explains the events, and that after 12 hours, the effects wore off. The next day, Ralph Dibny (aka the Elongated Man) and his wife Sue have arrived in Gotham City, Ralph wanting to investigate a mystery of men who go into the wax museum with one face and leave with another. Meanwhile, Bruce Wayne has returned to the bank to inform them that the person who withdrew money from his account was a fraud, and soon another wealthy man enters the bank complaining that his safety deposit box was emptied by somebody posing as him. Bruce Wayne makes the connection when the man states he went to the wax museum.

That night, Batman and Robin and the Elongated Man all go to investigate the museum and stumble upon each other. Being attacked by thugs, they learn that the whole situation was thought up by "Boss" Barron, using a camera that switches peoples faces with somebody else, they would change faces with a wealthy person and clean out their accounts. After breaking things up and (with the help of Elongated Man) prevented the crooks from using the device on Batman (and thereby discover his secret identity) the three heroes round up the crooks and turn them over to the police.

As reward for their help, Batman (As Bruce Wayne) invites Ralph and Sue over for dinner. Before they arrive he tells Robin that he told Ralph his secret identity, then tells the shocked Robin that he did it while Ralph was amnesiac due to being exposed to the face swapping camera, would forget when changed back to normal.

Retrieved from "https://heykidscomics.fandom.com/wiki/Detective_Comics_Vol_1_331?oldid=1378407"
Community content is available under CC-BY-SA unless otherwise noted.