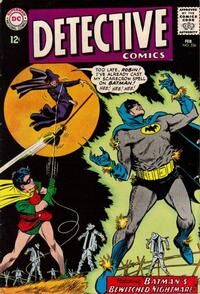 An apparent witch has appeared in Gotham City and is attempting to impede Batman's crusade against crime by helping out crooks that Batman is trying to stop. Chasing a gang to a local farm, Batman is turned into a scarecrow, until Robin is able to knock the witch off her broomstick and take possession of it himself, thereby canceling out the spell on Batman.

Batman rounds up the crooks and Robin defeats the Witch, the dynamic duo then turns them over to the police. Placing the witches broom in their trophy room, it suddenly starts giving off a recorded message from the Outsider, who vows that he will strike against Batman soon.

Appearing in "The House of 'Flashy' Traps!"Edit

Synopsis for "The House of 'Flashy' Traps!"Edit

Retrieved from "https://heykidscomics.fandom.com/wiki/Detective_Comics_Vol_1_336?oldid=1378412"
Community content is available under CC-BY-SA unless otherwise noted.