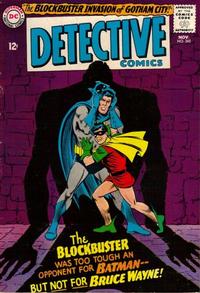 He's too tough for Batman... but not for Bruce Wayne!

Appearing in "The Blockbuster Invasion of Gotham City!"Edit

Synopsis for "The Blockbuster Invasion of Gotham City!"Edit

One night while piloting his boat out at sea, Bruce Wayne is forced to abandon ship when it hits a rock and starts to sink. Swimming to a nearby island, Bruce saves Mark Desmond and returns him to his brother Roland.

Months later, Batman and Robin begin investigating a giant creature dubbed "The Blockbuster" that has been terrorizing and robbing various locations in Gotham City.

Following the massive creature back to the island that Batman recognizes that the one the Desmonds live on, Batman deduces that Blockbuster is really Mark Desmond. While appealing to the beasts human side by changing to Bruce Wayne and calling for help, Robin captures Roland.

Taking Roland to shore to answer for his crimes, it is learned that Mark had taken a serum to become the Blockbuster in order to be strong, and that Roland exploited the monsters strength. Going back to the island to collect Blockbuster, while disguised as Roland, Batman finds that the monster has walked off into the ocean.

Appearing in "Robberies in Reverse!"Edit

Synopsis for "Robberies in Reverse!"Edit

Retrieved from "https://heykidscomics.fandom.com/wiki/Detective_Comics_Vol_1_345?oldid=1490343"
Community content is available under CC-BY-SA unless otherwise noted.