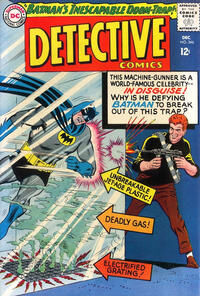 When a magician and escape artist steals $100,000 to have inventor Eivol Ekdal to build yet another trap to escape out of, the two decide to make an inescapable death trap to capture Batman in. Tricking the caped crusader into trapping himself into a gas filling glass box with electrified floor, they attempt to kill him. However, Batman manages to escape with the aid of his utility belt.

Escaping, the two decide to sell their services to other crooks, however this next plot is foiled by Batman and Robin who round everybody up and turn them over to the police.

Appearing in "Peephole to the Future!"Edit

Synopsis for "Peephole to the Future!"Edit

Retrieved from "https://heykidscomics.fandom.com/wiki/Detective_Comics_Vol_1_346?oldid=1378421"
Community content is available under CC-BY-SA unless otherwise noted.