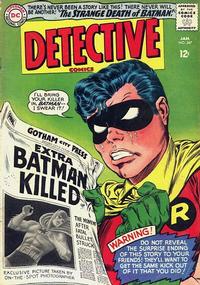 Appearing in "The Strange Death of Batman!"Edit

Synopsis for "The Strange Death of Batman!"Edit

Gotham City is terrorized by the crimes of the Bouncer, a crook who Batman and Robin are unable to stop due to the nature of his bouncing powers. However the dynamic duo devise a device which freezes the Bouncer in place long enough for Batman to knock him out.

However, Batman writer Gardner Fox takes a moment to take a look at an alternate ending to the story in which Batman is instead killed by the Bouncer. In this imaginary version, after mourning the loss of Batman and turning down aid from the Justice League of America to help capture the Bouncer, Robin manages to single-handedly defeat the foe. Afterwards, Robin is met in the Batcave by the Batman and Alfred from Earth-Two who had decided to come and join Robin after hearing of Earth-One Batman's death.

Appearing in "The Man Who Hated Money!"Edit

Synopsis for "The Man Who Hated Money!"Edit

Retrieved from "https://heykidscomics.fandom.com/wiki/Detective_Comics_Vol_1_347?oldid=1378422"
Community content is available under CC-BY-SA unless otherwise noted.