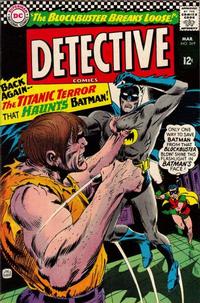 Appearing in "The Blockbuster Breaks Loose!"Edit

Synopsis for "The Blockbuster Breaks Loose!"Edit

Following his last conflict with Batman and Robin, the massive creature known as Blockbuster had sought refuge in an undersea cave. However, some months later while Batman and Robin are breaking up a bank robbery, suddenly Blockbuster breaks through the floor and attacks.

While Robin handles the crooks, Batman attempts to appease the creature by removing it's mask, hoping its memories of Bruce Wayne would calm it down. However, his cowl some how sticks itself to his face, leaving Batman at the mercy of the Blockbuster until he is knocked unconscious.

Tracking down Blockbuster to another location later with Robin, they had devised an special flashlight that when shined on Batman's cowl it would resemble that of Blockbusters brother, Roland. However, the plan also fails when a mysterious attacker interferes with the battle and attempts to trap Batman in a coffin. However, Blockbuster attacks the mystery man, who then flees. Batman manages to break free of the trap and knock out the Blockbuster.

Later, we find out that the mystery attacker was the Outsider, who had orchestrated the whole event from the beginning.

Appearing in "The 13 O'Clock Robbery"Edit

Synopsis for "The 13 O'Clock Robbery"Edit

Retrieved from "https://heykidscomics.fandom.com/wiki/Detective_Comics_Vol_1_349?oldid=1378424"
Community content is available under CC-BY-SA unless otherwise noted.