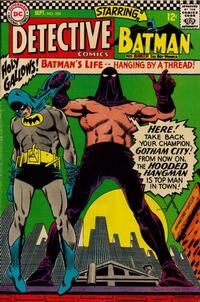 Appearing in "Hate of the Hooded Hangman!"Edit

Synopsis for "Hate of the Hooded Hangman!"Edit

The wrestler known as the Hooded Hangman has called out to Batman for a challenge to be the most popular masked man in Gotham City. After an initial fight which Batman manages to escape, Batman deduces that newscaster Telman Davies is the Hooded Hangman.

Arranging an official fight on the roof of the wrestling arena, the loser to be unmasked, Batman and the Hooded Hangman duke it out. When the Hangman manages to defeat Batman, he unmasks the Caped Crusader to reveal the face of Telman Davies. As the Hangman is confused, Batman knocks the Hangman out and reveals him to be the real Hangman. After the fight, Telman's attempt at being the most celebrated masked fighter is ruined and he leaves the city for South America.

Appearing in "The Tantalizing Troubles of the Tripod Thieves!"Edit

Synopsis for "The Tantalizing Troubles of the Tripod Thieves!"Edit

Retrieved from "https://heykidscomics.fandom.com/wiki/Detective_Comics_Vol_1_355?oldid=1378430"
Community content is available under CC-BY-SA unless otherwise noted.