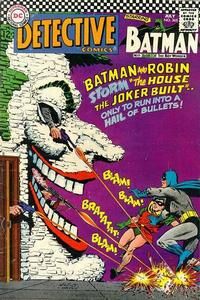 Appearing in "The House the Joker Built!"Edit

Synopsis for "The House the Joker Built!"Edit

In direct response to high sales of Batman related merchandise, the Joker sets up a counter in a department store selling Joker related merchandise for the purpose of underselling the Batman merchandise. When a department store employee calls the police to stop this unauthorized dealer, everyone realizes that it's not a person in a Joker mask, but the real villain himself, who then flees the scene. Commissioner Gordon would call in Batman and Robin and tell them of the queer event, leading Batman to theorize that the Joker must be planning another one of his joke inspired capers.

That night while out on patrol, Batman and Robin spot a Joker-signal in the sky and track it back to a rare metals factory where the Joker is in the process of robbing it of it's rare metals. The Joker advises the Dynamic Duo that he purposely called them to the scene of his latest crime because he wanted some opposition and although Batman and Robin outmatch the Joker's thugs in a fist fight, the Joker and his men manage to get away thanks to a number of specially made devices created by the Joker. When the fight is over, Batman is even more convinced that the Joker is up to some intricate plot, and takes note of the fact that the Joker would freeze in key positions during their fight and wonders what it's all about.

The following day, as Bruce Wayne, Batman would learn that the Joker merchandise were made to the order of a "Mr. J" sent to the manufacturer. Relating to this story to Dick when his ward returns home from school, they change into Batman and Robin and seek out more clues. Confronting a known stool pigeon, Batman is tipped off to go to the basement level of the Old Gotham Hotel, a flea-bag hotel known for boarding to unsavory characters. Going into the basement, they find an underworld "store" selling Joker merchandise. Confronting the Joker there, Batman and Robin fight the assembled crooks and the Joker, and find that the Joker appears to be show boating. When the Joker escapes we finally learn why: Part of his current merchandising scheme involves selling specially made Joker-TV's that pick-up a special wavelength that allows criminals to tune into Joker TV, a television program that the Joker shows footage of himself tripping up Batman.

Hoping to get more subscribers, the Joker lures Batman to a underground building fashioned into a representation of the Joker's head. However, this time the Joker is easily defeated by Batman and Robin and humiliated in a live broadcast to every crook who has a special Joker-TV set. His defeat isn't an entire wash however, as on the night when Batman and Robin hand out Emmy Awards to television actors, in a secret underworld meeting place, the Joker is awarded the first "Joker Award" for underground television, even though he is in jail and cannot be there to collect his prize.

Appearing in "The Crooks That Captured Themselves!"Edit

Synopsis for "The Crooks That Captured Themselves!"Edit

Retrieved from "https://heykidscomics.fandom.com/wiki/Detective_Comics_Vol_1_365?oldid=1378440"
Community content is available under CC-BY-SA unless otherwise noted.