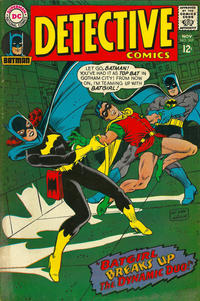 Appearing in "Batgirl Breaks Up the Dynamic Duo"Edit

Synopsis for "Batgirl Breaks Up the Dynamic Duo"Edit

While out on a patrol, Batgirl learns of a robbery at the Gotham Gothic Arts Museum and chases after the crooks. During the fight, Batman and Robin arrive to help out. Batman lands in the swamp and after rounding up the robbers Batgirl notices that there is something wrong with Batman and asks Robin to help her out.

Later in her civilian guise of Barbara Gordon, she does research to learn that Batman has been infected with Swamp Fever, which after seven days causes a full body collapse. Barbara vows to act as Batman's guardian angel until the Swamp Fever runs it's course through Batman's system.

In order to keep a better watch and limit Batman's activies, Batgirl tells Robin what's going on and the two team-up, making Batman believe that Robin is leaving their partnership to fight crime with Batgirl instead. The two always remain a step ahead of Batman in stopping crimes until the fever finally takes effect and knocks Batman out. Finally, with the help of Robin, Batman get's the medical treatment he needs in his Bruce Wayne identity.

Meanwhile, elsewhere in the city, Catwoman reads the recent news about Batgirl and vows to win Batman's heart, thinking that Batgirl is competition for Batman's effections.

Appearing in "Legend of the Lovers' Lantern"Edit

Synopsis for "Legend of the Lovers' Lantern"Edit

Retrieved from "https://heykidscomics.fandom.com/wiki/Detective_Comics_Vol_1_369?oldid=1378444"
Community content is available under CC-BY-SA unless otherwise noted.