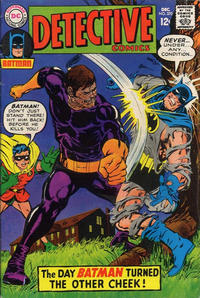 Appearing in "The Nemesis from Batman's Boyhood!"Edit

Synopsis for "The Nemesis from Batman's Boyhood!"Edit

Batman and Robin are on the trail of the Blitzkrieg Bandit, a crook who only robs a city for two days before moving onto another town. Finding him as he is just finishing a robbery of a building, Batman and Robin engage him in battle. During the fight, Batman gets a close look of the man they are after and becomes frightened, the Bandit takes advantage of this to land some punches on Batman. However, the Blitzkrieg Bandit is forced to flee when he knocks Batman into a display window causing a burglar alarm to go off.

Returning to the Batcave and changing back into their civilian guises, Bruce Wayne explains to Dick Grayson that he had recognized the Blitzkrieg Bandit as his old childhood tormentor Bart Lambert. He explains that when he was 10 years old, he was constantly terrorized by Lambert who would beat up on Bruce regularly, even chipping one of Bruce's teeth at one point. Bruce explains that eventually he decided to exercise and build up muscle so that he can defend himself against Lambert, but he never had a chance to defend himself due to the fact that Lambert had moved away before he could try to beat on Bruce again.

Bruce deduces that Lambert might not have forgotten Bruce Wayne, and would target Wayne Manor next. Changing back into Batman and Robin, the Dynamic Duo hide out in the mansion to wait and see if Lambert makes an appearance. Sure enough, Bart breaks into the mansion and attempts to rob it. During the fight, Batman manages to gain the upper hand, until his childhood fear of Lambert kicks in allowing Lambert to once more knock Batman silly and flee the scene. Robin would follow after Lambert in the Batmobile.

Batman would be revived by Alfred when the faithful butler returns home, and just in time to receive a distress call from Robin. Rushing to Robin's rescue in the Batcopter, Batman arrives too late and it appears as though Lambert has killed the Boy Wonder. In a fury, Batman smashes into Lambert's hideout and savagely attacks his old tormentor and overcomes his fear to knock him out and bring him to justice. Robin, alive and well arrives on the scene to cheer Batman on. The next day over breakfast, Dick explains to Bruce that he faked being dead in order to push Batman into facing his fear hoping that Batman would be too emotional to notice that he was never really killed.

Appearing in "Case of the Colorless Cash!"Edit

Synopsis for "Case of the Colorless Cash!"Edit

Retrieved from "https://heykidscomics.fandom.com/wiki/Detective_Comics_Vol_1_370?oldid=1378445"
Community content is available under CC-BY-SA unless otherwise noted.