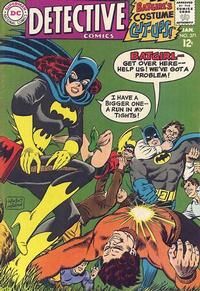 Barbara Gordon is witness to the most recent robbery being committed by the Sports Spoiler Gang, a group of crooks who use different sports themed crimes, this time using bicycles as their means of escape. Changing to Batgirl she tries to stop them, however during the fight she has to stop when her head piece is knocked askew. The crooks would have escaped if not for the timely arrival of Batman and Robin. Afterwards, Batgirl is hard on herself because she allowed her vanity get in the way of fighting crime.

Trying to break up the rest of the Sports Spoilers, each time Batman, Robin and Batgirl go into battle some thing or another causes Batgirl to worry over her appearance over the fight at hand. Finally when busting up a Sports Spoiler robbery at a Jai Alai match, Batgirl gets a run in her tights. As she laments over it, the crooks are distracted by the spectacle and gawk at her long enough for Batman and Robin to knock most of them out, Batgirl joins them in defeating the rest.

After the fight was over with, as Barbara Gordon, Batgirl muses how she made the run on purpose.

Appearing in "The Bellringer and the Baffling Bongs"Edit

Synopsis for "The Bellringer and the Baffling Bongs"Edit

Retrieved from "https://heykidscomics.fandom.com/wiki/Detective_Comics_Vol_1_371?oldid=1378446"
Community content is available under CC-BY-SA unless otherwise noted.