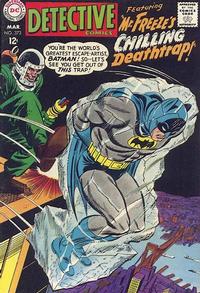 Bruce Wayne, Dick Grayson, and Alfred are being rushed to Gotham City hospital in an ambulance to take Aunt Harriet for a much needed cryogenic operation to save her life. At the same time, Batman's old foe Mr. Zero—rechristening himself Mr. Freeze—is breaking into a mansion in the Clayton Woods region of the city. The simultaneous use of the cryogenic device and Mr. Freeze's freeze ray causes both devices to short out.

The surgeons tell Bruce, Dick and Alfred that if the device isn't repaired or replaced in the next few hours Aunt Harriet will die. Just then the Bat-Signal appears in the sky prompting Dick and Bruce to leave and go into action as Batman and Robin. Rushing to a payphone, Bruce calls Commissioner Gordon and learns that Mr. Freeze has stolen priceless paintings from the home of Ralph Porter. After terminating the call, Bruce tells Dick that he is good friends and that Ralph put a duplicate on display while the original, just recently shipped in from Europe is really in his safe. Bruce correctly deduces that Ralph's phone was bugged by Mr. Freeze, and so he places a number of calls to Ralph (disguising his voice as other well wishers each time) praising Ralph's forethought for putting the real painting in his safe at his office, in an attempt to lure Mr. Freeze into a second attempt to steal the real painting.

Sure enough, Mr. Freeze is listening in and is compelled to do just that, and when he begins to break into the Porter Import Company to steal it Batman and Robin are there to meet them. Batman and Robin's efforts are hindered by Mr. Freeze's cryogenic weapon, however when Mr. Freeze attempts to freezer them in solid blocks of ice the Dynamic Duo are prepared with special heating units built into their utility belts that counteract the cold.

However, the two heroes are overpowered and Batman's heating device is seemingly turned off. Mr. Freeze then seals Batman in a block of ice and pushes him off the roof of the building hoping that the Dark Knight will die upon impact with the ground. Batman manages to break free of the ice and save himself, resuming his attack on Mr. Freeze. Caught off guard, Mr. Freeze and his men are easily felled by the Caped Crusader. As Batman turns Mr. Freeze and his gang over to Commissioner Gordon, Robin races back to the hospital where in his civilian guise of Dick Grayson turns over Mr. Freeze's weapon to the surgeons to use to complete Aunt Harriet's operation.

Returning to the hospital as Bruce Wayne, Batman learns that Aunt Harriet is going to pull through. When Dick inquires as to how Bruce managed to break free of the ice with his heating device turned off, Bruce explains that while the crooks were busy he rewired the device and instead of switching it off, they had actually turned it on.

Appearing in "The Riddler on the Roof!"Edit

Synopsis for "The Riddler on the Roof!"Edit

Elongated Man visits Gotham City and sees the Bat-Signal. He answers the signal hoping to meet Batman and Robin. Instead he meets Commissioner Gordon, who informs him that Batman is out of town, and that the signal was activated without his consent. When Gordon and Ralph reach the roof, they discover a clue left by the Riddler. Elongated Man interprets the clue and finds the crook in the middle of a jewel robbery. Ralph defeats the Riddler just as Batman arrives, having returned to town. Batman compares notes with the Elongated Man, and they discover that they had interpreted the clue differently, but it had led them both to the same location.

This is the second appearance of Mr. Freeze and the first in 10 years time. It is also the first time he uses the moniker, "Mr. Freeze'. It is hinted in the story that the name change was in part due to the Batman TV program of the 60's, which used the name in three different two-part episodes for the villain.

Retrieved from "https://heykidscomics.fandom.com/wiki/Detective_Comics_Vol_1_373?oldid=1378449"
Community content is available under CC-BY-SA unless otherwise noted.