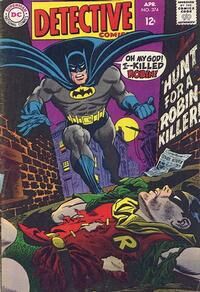 Appearing in "Hunt for a Robin-Killer!"Edit

Synopsis for "Hunt for a Robin-Killer!"Edit

Batman and Robin arrive at a warehouse where the Lemon Brothers are currently hiding out. Batman sends Robin around back while he attacks from the front. While Batman is busy fighting the Lemon Brothers and their thugs, Robin is attacked by an unknown assailant and beat within an inch of his life. When Batman goes out to find out what happened to the Boy Wonder, Batman is horrified to find that Robin has been savagely beaten and vows to avenge his partner and capture those responsible.

After turning Robin over to the hospital, Batman returns to the scene of the crime and gathers clues, deducing that the person who attacked Robin was wearing sneakers, a corduroy jacket, and was tall and strong. Searching through known criminal hang outs, Batman finds a man meeting these characteristics and savagely attacks him. Although this man denies any responsibility for Robin's condition, Batman knocks him out and drags him to police headquarters. There, Commissioner Gordon regrets to inform Batman that the man is Jim Condors a prize fighter whom Gordon himself witnessed during the fight and even got an autograph. Still unconvinced, Batman asks the man to sign his name and they compare the two signatures, and to Batman's dismay they match. Condors then threatens to sue Batman for the rough treatment he received at the vigilantes hands.

Checking on Robin, Batman learns that the Boy Wonder is in stable condition and will live. Batman then goes back to the Batcave to try and figure out who would have attacked Robin. Looking through the list of criminals that Robin had captured, Batman notices that one of them was a man named Ed Condors, the twin brother of Jim. Batman shows up at Ed Condors house and confronts Ed on posing as Jim while Jim went to beat Robin. Knocking Ed out, Batman disguises himself and waits for Jim to come home so that Batman can catch him confessing the crime.

"Ed" tells Jim that Robin is still alive and suggests his fear that the Boy Wonder would be able to ID Jim, Jim tells "Ed" that he wore a mask and while Jim goes out to bring it to "Ed", Batman drops his disguise and once more gives Jim a beatdown when he returns with the mask. With both of the Condors knocked out, Batman turns them and the evidence over to Commissioner Gordon.

Sometime later, Robin is released from the hospital and is fully capable to resume his career as Batman's sidekick.

Appearing in "The Amazing Crook-Gatcher!"Edit

Synopsis for "The Amazing Crook-Gatcher!"Edit

Charles Bryant has invented a new gun called a crook-gatcher which he claims can hit crooks around corners. He joins Elongated Man during a bank robbery and fires the gun through a pedestrian to hit one of the crooks. Following the capture of the other crooks, Bryant receives publicity for his invention. When the Elongated Man returns home, Sue mentions that crooks might go after Bryant before he can turn the crook-gatcher over to the police. Ralph finds that Bryant has indeed been kidnapped. He also learns that the pedestrian at the bank robbery was Lila Taylor, Bryant's fiancee.

Elongated Man tracks down the crooks who have kidnapped Bryant and battles them. Bryant is disappointed because he planned to catch them himself. The crook-gatcher was a fake used by Bryant to prove himself to the police. After the crooks are caught, Bryant is awarded a position as a police scientist.

"Hunt for a Robin-Killer!" is reprinted in Batman #257 and Showcase Presents: Batman #3.

Retrieved from "https://heykidscomics.fandom.com/wiki/Detective_Comics_Vol_1_374?oldid=1378450"
Community content is available under CC-BY-SA unless otherwise noted.