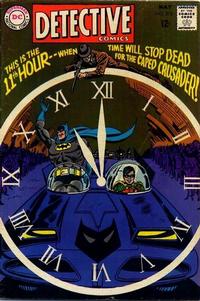 Appearing in "The Frigid Finger of Fate!"Edit

Synopsis for "The Frigid Finger of Fate!"Edit

Pete Maddox is almost ready to commit his most ambitious crime yet: The assassination of Batman who is the guest of honor for a parade being held in his name. As he sets up for his shot, he recalls back to how he got to this point:

Sometime ago, the poor and destitute Maddox was living in a rundown flop house with no hot water and no heat. After a cold shower in the middle of winter the freezing cold Maddox goes to sleep and has a dreams the result of a horse race, which to his surprise comes true the next day. Unable to pay the rent the next day, Maddox is thrown out onto the street where he has to spend a cold winter night sleeping on a park bench. He has another dream where Batman stops a crook from robbing a candy store, and how Batman fails to turn up the stolen loot which was hidden in a nearby trashcan.

Waking up, he decides to see if this even was also another premonition, and to his surprise he finds the money right where he dreamed it would be. Deciding that he is onto something, Maddox attempts to use the dreams for his own financial gain and reads up all he can about Oneiromancy at the Gotham Library. However, when he bet on a baseball game, he would lose, making Maddox realize that the catalyst that caused him to have his prophetic dreams was the cold.

Soaking in an ice cold bathtub, he learns how to pull off the perfect crime at the Gotham Diamond Exchange and escape before Batman and Robin show up. Gathering a group of crooks, they go to rob the diamond exchange, and are foiled by the arrival of Batman and Robin. Pete manages to escape without being seen by the Dynamic Duo, Maddox realizes that he had not foreseen Batman and Robin's involvement and realizes that things go wrong when he speaks aloud what he has dreamed about.

After spending the night sleeping on a block of ice, Maddox has his dream about assassinating Batman, which brings him to the present. Before he can pull the trigger, the crooks who were captured in the diamond heist catch up with him and shoot wound him with a bullet. When Maddox blurts out that he was trying to kill Batman, the Caped Crusader storms onto the scene and beast up the crooks and saves Maddox's life. Unaware of what Maddox's intentions were, Batman lets his attempted assassin go. Maddox then decides to try and dream up a new assassination plot against Batman. A few days later, Dick Grayson shows Bruce Wayne a strange newspaper story about Maddox, telling how he met a tragic death when he paid a butcher $100 to sleep in a meat cooler and froze to death.

Appearing in "The Face That Stopped Clocks"Edit

Synopsis for "The Face That Stopped Clocks"Edit

Ralph Dibny expects a mystery all day as it is his birthday and he knows his wife, Sue, always creates one for him to solve as a birthday gift. They encounter a man who apparently can stop clocks by looking at them. Ralph follows him but sees an address that leads him to a house that is being burglarized. He stops them, then discovers the address had been read backwards. The correct way to read it leads him to his surprise birthday party where he tells Sue about the bonus mystery he stumbled upon and they then enjoy the party.

Retrieved from "https://heykidscomics.fandom.com/wiki/Detective_Comics_Vol_1_375?oldid=1378451"
Community content is available under CC-BY-SA unless otherwise noted.