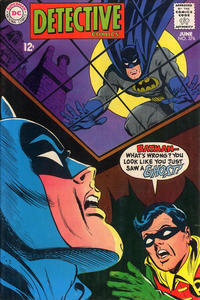 Records from the 20th century have been destroyed in the null-nuclear war of the 22th century. People from the future do not know if Batman was a myth or a real person. A group calling themselves the Batmaniacs aim to prove that Batman is real, so they send one member, Tomas back in time. Tomas arrives in the 20th century where he exists only as a ghost. He then watches as Batman and Robin help Commissioner Gordon solve a case. Gordon had some important evidence stolen from his car. Batman identifies the thief and tracks him down. He then recovers the evidence. During the entire adventure, Batman believes he is being watched by a ghost.

Tomas returns to his own time period with evidence that Batman is real. However, he doesn't learn that the Caped Crusader is really his ancestor.

Art collector Marty Dillingham is convinced that a voodoo doll that was left at his house is linked to his health. If harm befalls the doll, he believes that the same thing will happen to him. When the Elongated Man comes to town, Marty enlists his aid to break the curse. Ralph convinces Marty that his superstition is a fantasy, but before he can prove it, the doll is stolen. The Elongated Man traces the doll to Dillingham's rival Harry Hanson. Hanson had actually planted the doll and placed a bug on it. The doll then led him to Marty's secret collection. While the Elongated Man apprehends Hanson the doll is destroyed. Since nothing happened to Marty, the collector is finally convinced that the voodoo doll was a fake.

Retrieved from "https://heykidscomics.fandom.com/wiki/Detective_Comics_Vol_1_376?oldid=1378452"
Community content is available under CC-BY-SA unless otherwise noted.