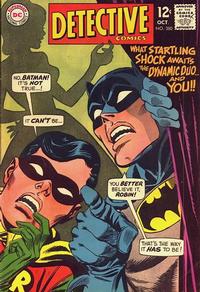 Bruce Wayne, Dick Grayson, and Alfred are dumbfounded when a woman named Ginny Jenkins appears at their doorstep with the revelation that she is really Bruce’s wife.

Appearing in "Fortune in a Flower Pot!"Edit

Synopsis for "Fortune in a Flower Pot!"Edit

Retrieved from "https://heykidscomics.fandom.com/wiki/Detective_Comics_Vol_1_380?oldid=1378456"
Community content is available under CC-BY-SA unless otherwise noted.