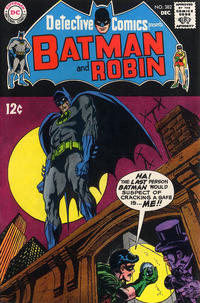 Appearing in "Riddle of the Robbin' Robin!"Edit

Synopsis for "Riddle of the Robbin' Robin!"Edit

The Armorer, a funeral director who runs guns for mobs, eavesdrops on them by hidden mikes in the weapons and secretly steals their loot. But when the crooks ask him for help in setting a booby-trap, he turns it into a deathtrap for Batman and Robin.

Appearing in "The Wishing Well Wonder!"Edit

Synopsis for "The Wishing Well Wonder!"Edit

Retrieved from "https://heykidscomics.fandom.com/wiki/Detective_Comics_Vol_1_382?oldid=1378458"
Community content is available under CC-BY-SA unless otherwise noted.