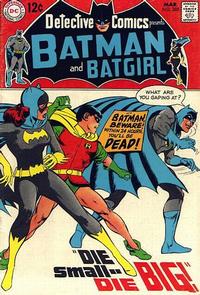 One night a party at Wayne Manor is interrupted with the arrival of a statue of Batman with a note stating that Batman will perish in 24 hours. However when they unmask the statue, it is the face of a man nobody attending the party has ever seen before. Turning back the clock we learn that the face in question is that of Herbert Small, a mailman who idolizes Batman, and is stricken with a malady that has made his hearing super sensitive.

One day when doing his regular deliveries, he overhears a plot by a number of crooks who plan on getting revenge against Batman. He notes the faces of those who leave, and after Batman narrowly beats a group of would-be murderers, Herbert decides to get involved. Since his days are numbered, Herbert disguises himself as one of the crooks and reports back to their boss telling him that he's "seen" Batman's secret identity and tells him that it's Herbert Small.

Flashing to the present, Herbert is the one who leaves the statue of Batman with the note, hoping that one of the high profile people at Wayne's party would be able to get word back to Batman who would be able to figure out the clue that he's left in terms of the face on the statue being Smalls. After the party, Bruce Wayne does figure it out when Alfred brings him the mail, and so as Batman springs in and saves Small's life. However, even though Batman breaks up all the crooks he fails to save Small's life who jumped in the path of a bullet meant for Batman. Before passing away, Batman fullfills Herbert's last wish: To see the true face of Batman. Satisfied (and implying that he knew who Batman was) Herbert dies a hero.

Appearing in "Hunt For the Helpless Hostage"Edit

Synopsis for "Hunt For the Helpless Hostage"Edit

Continuing from last issue... After saving Mark Hanner from crooks, Batgirl takes him to the hospital where he explains that he is a private detective who has got negative attention form gang-boss Web Foote who was the one who kidnapped him and probably has Sharon (the woman from last issue) as his hostage. When Web and his goons captured Hanner to get incriminating evidence that he had, his diabetes kicked in and he required penicillin and so sent for Sharon to get the medication, this was when Batgirl rushed in. After explaining his story and his need to find Sharon, Batgirl departs.

Later when he is well enough Hanner begins tracking Sharon and soon brokers a deal to exchange the evidence for her. When he meets with Web and his goons in Gotham Park. When Foote decides it's best to kill both Mark and Sharon, Batgirl arrives and fights off the crooks. After Batgirl is relieved to learn that Sharon isn't Mark's girlfriend but his sister. The next day, as Barbara Gordon, she manages to secure a date with Mark.

Retrieved from "https://heykidscomics.fandom.com/wiki/Detective_Comics_Vol_1_385?oldid=1378461"
Community content is available under CC-BY-SA unless otherwise noted.