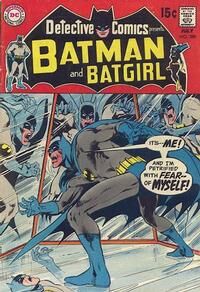 The Scarecrow is released from jail, and shortly thereafter Batman seems to have regained his ability to strike terror into the hearts of gangsters merely by his presence. But it is all part of a fear-trap sprung against Batman himself.

Appearing in "Batgirl's Bag of Tricks!"Edit

Synopsis for "Batgirl's Bag of Tricks!"Edit

Continuing from last issue, Batgirl is caught in the sights of a bunch of crooks masquerading as members of the Justice League at a costume party who were trying to obtain stolen jewels, however were double crossed by their partner Darlene Dawson, who had set up Barbara Gordon to take the fall little realizing that Barbara was the real Batgirl.

Easily defeating the crooks, she decides to track down Dawson, little knowing that she is being followed by "Superman." She end up tracking Darlene to Cosby Corners, where she finds out that she is really the daughter of old man Dawson a reputed criminal leader. Batgirl then fights the two, and makes short work of them when the "Superman" crook tries to interfere and is shot dead by grandfather Dawson. Batgirl manages to incapacitate both crooks and turns them over to the police.

Retrieved from "https://heykidscomics.fandom.com/wiki/Detective_Comics_Vol_1_389?oldid=1378466"
Community content is available under CC-BY-SA unless otherwise noted.