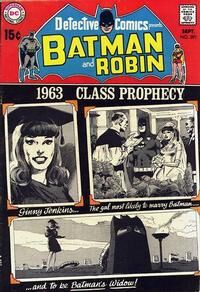 Physical therapist and workout maven Tim Clark has fallen for Ginny Jenkins, but her boss, gourmet magazine editor and extortionist Arnold, comes between them. To make her see the light, Tim decides to impersonate the Batman.

With a teachers’ strike threatened at Gotham High, Robin sets out to get the gangster responsible for the negotiator’s changed announcement.

Retrieved from "https://heykidscomics.fandom.com/wiki/Detective_Comics_Vol_1_391?oldid=1378468"
Community content is available under CC-BY-SA unless otherwise noted.