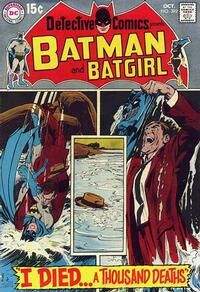 Appearing in "I Died... A Thousand Deaths"Edit

Synopsis for "I Died... A Thousand Deaths"Edit

Batman appears to have been killed in a watery fight with gangster Angles Moore, but Moore and his boss Scap Scarpel are plagued by ghostly reminders of Batman everywhere they go.

On her way to work Barbara Gordon spots a spectator of a mugging in Gotham Park. Later when this individual shows up at the library, he introduces himself as criminologist Jason Bard. Finding his background in criminology interesting she goes with him back to the scene of the crime where he points out that the mugger must have been seven feet tall. Piecing the crime together with the available evidence, Barbara is so interested in Bard that she asks him out on a date to a basketball game. There they notice that one of the players, known as Topper, has a bandage on his forehead. When Bard asks about it, and that he spotted Topper jogging in Gotham Park that morning, Topper quickly dismisses it.

During the game, both Jason and Barbara are secretly interested in pursuing things further, when Jason excuses himself he goes to check out the locker room and finds himself attacked by thugs. He is soon rescued as Barbara who has also gone there to investigate in her Batgirl guise. She quickly fights off the crooks, and tells Bard that she is going to stake out Topper's locker to find out what may be inside and insists that Bard return to his date, allowing her time to quickly switch back to her civilian identity. Continuing to watch the game, the couple secretly try to think of a plan to ditch each other so that they can pursue their case.... This story is continued next issue...

Retrieved from "https://heykidscomics.fandom.com/wiki/Detective_Comics_Vol_1_392?oldid=1378469"
Community content is available under CC-BY-SA unless otherwise noted.