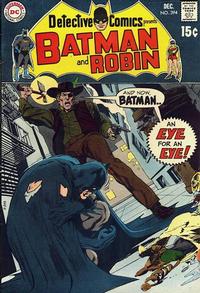 Appearing in "A Victim's Victim!"Edit

Synopsis for "A Victim's Victim!"Edit

An Indian race-car driver accuses Bruce Wayne, who backed a competitor, of having his eye shot out by a sniper during his last race. Thus, Batman gets on the case to prove Wayne innocent, and to find the real culprits.

Appearing in "Strike... While the Campus Is Hot"Edit

Synopsis for "Strike... While the Campus Is Hot"Edit

On his day of registration at Hudson University, Dick Grayson is assaulted by persons appearing to be cops during a protest sit-in. But he is taken to a barn hideout, not a jail, and Robin learns that the cops and protesters are not what they seem.

Retrieved from "https://heykidscomics.fandom.com/wiki/Detective_Comics_Vol_1_394?oldid=1378471"
Community content is available under CC-BY-SA unless otherwise noted.