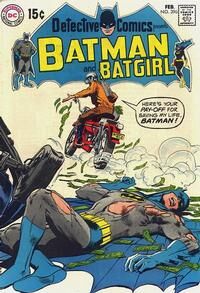 Appearing in "The Brain Pickers!"Edit

Synopsis for "The Brain Pickers!"Edit

A gang of crooks attempts to force Wall Street whiz-kid Rory Bell into masterminding moneymaking stock deals for them while out on his motorcycle, but he tips off his partner by code, which leads Batman to his rescue.

A series of murders involving timid red-heads are being committed by a serial killer the press is dubbing the Orchid Killer. One day while going through books at her library, Barbara Gordon stumbles upon a computer card belonging to one of the victims being used as a book mark. Finding the book was borrowed by Darren Tomkins and the computer card being for a dating service, she tries to track down Tomkins who has skipped out on his apartment. Asking the dating service for aid as Batgirl proves to be a dead end as well as the service keeps their members privacy.

Deciding the best way to catch the killer is to present herself as a helpless victim, she sets up an account for Barbara Gordon and making her seem enticing to the killer. In order to fulfill this plan she has to blow off a date with Jason Bard.

Later on a date with a man named Max Tournov, whom she thinks is the killer when he pins an orchid on her and asks for a kiss good night. Max freaks out saying she doesn't deserve the orchid and storms off. To be certain that Max isn't the killer, Barbara changes into Batgirl and follows him, but when she loses her trail, and just when she's about to give up hands reach out from the dark alley behind her and grab her mouth.... This story is continued next issue....

Appearing in "The Master of Mind Over Matter!"Edit

Synopsis for "The Master of Mind Over Matter!"Edit

Retrieved from "https://heykidscomics.fandom.com/wiki/Detective_Comics_Vol_1_396?oldid=1378473"
Community content is available under CC-BY-SA unless otherwise noted.