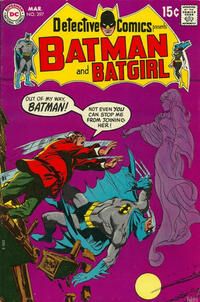 Appearing in "Paint a Picture of Peril!"Edit

Synopsis for "Paint a Picture of Peril!"Edit

Batman encounters a wealthy man who hires a gang to steal works of art he cannot buy which remind him of a lost love.

Appearing in "The Hollow Man"Edit

Synopsis for "The Hollow Man"Edit

Continued from last issue.... Believing her computer-matched date is the Orchid Killer, Barbara Gordon follows after him as Batgirl, only to lose him and to get attacked by a man hiding out in a dark alley. At first she believes it's Max until she see's the persons face is that of a handsome man. This attacker knocks her out, and later Batgirl comes too to find Max who explains that he arrived and scared off her attacker. With this date a bust, she sets up a new one as Barbara Gordon. Her second date is with a man named John Milman who quickly freaks out and attacks her, but is stopped by the arrival of Jason Bard, however Bard's bad knee fails him again and Milman manages to get away.

Tracking Milman to his home as Batgirl, she breaks in and attacks a man packing a suit case there to discover that it's the man who attacked in her in the alley the night before. Gaining the upper hand the easily defeats him and finds that he was both Max and Milman, and would disguise himself with masks. When she asks him why he committed the murders he explains it was because women never saw his inner beauty only falling for his good looks and it eventually drove him mad. After listening to his reason, a disgusted Batgirl turns him over to police.

Retrieved from "https://heykidscomics.fandom.com/wiki/Detective_Comics_Vol_1_397?oldid=1378474"
Community content is available under CC-BY-SA unless otherwise noted.