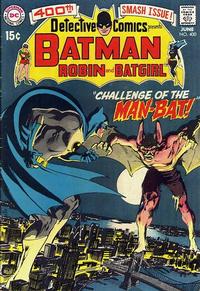 Appearing in "Challenge of the Man-Bat!"Edit

Synopsis for "Challenge of the Man-Bat!"Edit

Zoologist Kirk Langstrom is working late at the Gotham Natural History Museum putting together a bat habitat. Curator Wilkins bids him goodnight and leaves Langstrom alone in the museum. Now Langstrom can pursue his true interests—perfecting a serum that can endow people with enhanced auditory abilities via a specialized bat gland extract.

Elsewhere in the city, a group of thieves known as the Blackout Gang break into a vault. They equip themselves with black body stockings, infrared goggles and ultra-sonic tools that enable them to conduct themselves effectively in total darkness. For all their prowess however, the Batman still manages to get the drop on them. The criminals have a momentary advantage as Batman cannot see where they are, but for every punch one of them lands against him, the Batman is able to throw one right back at them. Realizing that their heist has gone sour, the Blackout Gang escapes from the building. One of them however, mistakenly leaves behind his ultra-sonic cutter. Batman recovers it and brings it back to the Wayne Foundation for analysis.

Back at the museum, Kirk Langstrom is pleased with his progress and decides to test his new formula upon himself. The serum produces immediate results and Langstrom's hearing increases to superhuman levels. The dripping sounds from a leaky faucet drive him from the room. He quickly determines that his eyes have now become greatly more sensitive to light and he deftly shuts off all the lights in the laboratory and dons a pair of sunglasses.

At the Wayne Foundation, Bruce inspects the ultra-sonic cutter and determines the frequency that the device operates off of. He develops a sonar detector calibrated to the cutter's unique frequency. He has Alfred help him to test out his new crime-fighting tools.

Back at the museum, Kirk Langstrom continues to mutate. He grabs his coat and hat, but grows frightened when something pushes his hat off of his head. Finding a mirror, he learns to his horror what is happening. Kirk Langtrom is physically turning into a Man-Bat. He decides that he must go into hiding until he can affect a cure for his condition. He telephones the curator and tells him that he has to leave town for a little while. He neglects to mention the true reason for his departure.

That evening, the Blackout Gang decides to rob the Gotham Natural History Museum. Once they activate the sonic cutter, Batman is able to locate them and track them down. The leader of the gang suspected that Batman might have divined a way to find them, so he confounds his efforts by casting a handful of ping pong balls across the floor. As Batman is wearing a special hearing aid to find the gang members in the dark, he becomes instantly disoriented from the amplified sound of the bouncing metal balls.

Although the Blackout Gang were prepared for Batman, they were not prepared for the museum’s "other" nocturnal guardian—the Man-Bat. The Man-Bat and Batman team-up and together they bring down the Blackout Gang. Once everything calms down, Batman casts his flashlight upon the Man-Bat's face and thanks him for his assistance. Batman is impressed by the Man-Bat's awe-inspiring "disguise", but the Man-Bat shies away, declaring that he is not wearing a disguise. As the Man-Bat runs off into the night, Batman wonders if he just made a formidable friend... or a foe.

Appearing in "A Burial for Batgirl!"Edit

Synopsis for "A Burial for Batgirl!"Edit

Driving to the library at Hudson University, Barbara Gordon hears a cry for help. Entering in the building as Batgirl, she is quickly subdued by an escaping young man. Getting to her feet she finds a body and quickly goes searching for the man who attacked her to find him being attacked by two students. Batgirl stops these students with the help of the timely arrival of Dick Grayson.

Going to the police station, she tells the chief of police that she came up from Gotham City with her friend Barbara Gordon who was delivering some rare books written by Edgar Alan Poe for an upcoming Poe festival. The police chief explains that the young man they captured Mark Osher is probably the killer of Amos Willard, who is the school business manager. This is based on the fact that Willard planned to have a nearby forest cut down so the university could build a new gym. This plan was opposed by Professor Huntington the schools biologist, and Osher who was an outspoken student. Osher threatened that he would kill Willard.

Interrogating Osher, Osher maintains his innocence and claims that he is was knocked out in the library and he had panicked when he came too and found Willard's body. Going back to the scene of the crime to investigate, Batgirl is cold-clocked from behind and soon finds herself bound and gagged and her attacker is sealing her into a room with bricks... This story is continued next issue...

Retrieved from "https://heykidscomics.fandom.com/wiki/Detective_Comics_Vol_1_400?oldid=1514519"
Community content is available under CC-BY-SA unless otherwise noted.