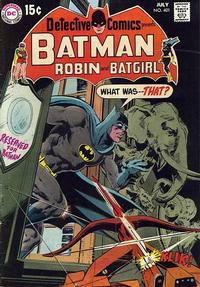 Appearing in "Target For Tonight!"Edit

Synopsis for "Target For Tonight!"Edit

A big-game hunter who dubs himself “the Stalker” deduces Batman’s secret identity and announces his intention to hunt down and kill the Caped Crusader.

Appearing in "Midnight is the Dying Hour!"Edit

Synopsis for "Midnight is the Dying Hour!"Edit

Stumbling upon a murder plot at Hudson University, Batgirl soon finds herself the killers next victim after being bound, gagged and sealed in a room behind a brick wall.

Earlier in the evening, Dick Grayson had taken on his guise of Robin in order to conduct his own investigation of the murder. Finding that the body of Willard was pointing at a book of poetry (particularly the words "POE") and remembering the Poe festival, Robin finally realizes who the killer might be. Rushing to the theater (where a new wing is being built for the festival) Robin catches the killer just before he can apply the last brick, however the murderer manages to get away. Robin then frees Batgirl, and the two heroes begin searching the theater for their assailant. After a chase through the theater, Robin and Batgirl manage to catch the killer who turns out to be none other than student Jack Markham.

Retrieved from "https://heykidscomics.fandom.com/wiki/Detective_Comics_Vol_1_401?oldid=1378478"
Community content is available under CC-BY-SA unless otherwise noted.