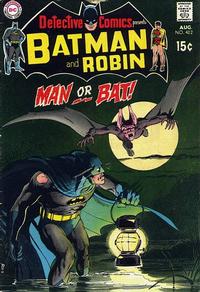 Appearing in "Man or Bat?"Edit

Synopsis for "Man or Bat?"Edit

Kirk Langstrom appears again as the Man-Bat, this time he is forced to become the Batman's enemy. After stealing a vial from a chemical company's safe, much to Batman's chagrin, Kirk returns to his lab above the Gotham Museum of Natural History. He believes he has finally found a mixture that can cure his transformation, until Batman bursts through the door in pursuit, causing him enough surprise to drop the compound onto the floor. With a screech of rage, Kirk fights off the Batman and leaps out the window. During his escape, he starts to evolve a leathery pair of wings that allow him to fly.

Now completely distraught over his loss of humanity, Kirk decides to simply embrace his new lifestyle as a giant bat. Coming across a small crack in the mountains, he tries squeezing through, hearing the calls of other bats inside. It is with great strain and greater will that he manages to push himself through. When Kirk takes a look around at his new home, he discovers that he had found the Batman's hidden lair, the fabled batcave! Soon after, Batman arrives, and the two have what Langstrom hopes to be their final battle. But Batman is much more familiar with the territory than Kirk is, who mistakenly hits his head hard against the top of the cave. The story ends with a determined Batman creating an antidote in his lab with an unconscious Man-Bat at his back

Appearing in "My Place in the Sun!"Edit

Synopsis for "My Place in the Sun!"Edit

After a Teen Titans case, Roy Harper (Speedy) spends some time with Dick Grayson on the Hudson campus and both get involved in a brawl incited at the school cafeteria.

Retrieved from "https://heykidscomics.fandom.com/wiki/Detective_Comics_Vol_1_402?oldid=1514521"
Community content is available under CC-BY-SA unless otherwise noted.