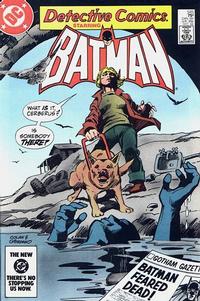 Appearing in "By Darkness Masked"Edit

Synopsis for "By Darkness Masked"Edit

Oliver Queen explains away his uniform to Bad Penny as a costume he is wearing for a play, and is admitted to the auto-automat. Shortly thereafter, he changes into his Green Arrow guise, defeats Penny and Pinball Wizard, and frees the hostages. At the same time, on another street in Star City, a costumed vigilante called Vengeance shoots down a man, and then mutters that he has others to bring to justice tonight, at their class reunion.

Bad Penny refers to Green Arrow as "Hawkeye", whick irks him for reasons he himself doesn't understand. But it's probably because Hawkeye is a Marvel character that has some strong similarities with our Ollie.

Retrieved from "https://heykidscomics.fandom.com/wiki/Detective_Comics_Vol_1_545?oldid=1636160"
Community content is available under CC-BY-SA unless otherwise noted.