Start a Wiki
Part of the 'Batman: Evolution' event 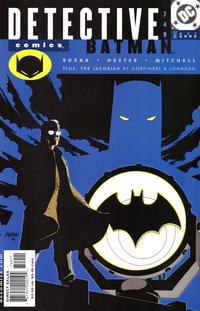 Synopsis for "The Jacobian, Chapter 4: Winds of Fortune"Edit

While Leelee sleeps, the Jacobian realises that he is developing feelings for her, feelings which are inappropriate since he has been hired to track down her missing husband. He also wonders how the two of them came to have such good fighting abilities, defeating several ninjas between them - he has no memory of any training and she is telling him nothing.

The two of them begin to search seriously for her husband, looking in a variety of places across the world. Eventually, their questions scare a man in Westwind City - they appear to be getting somewhere.

Retrieved from "https://heykidscomics.fandom.com/wiki/Detective_Comics_Vol_1_749?oldid=1634686"
Community content is available under CC-BY-SA unless otherwise noted.