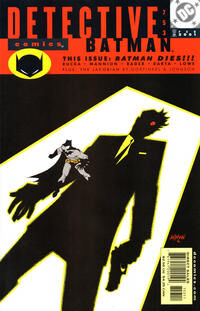 Appearing in "The Janus Double Down"Edit

Synopsis for "The Janus Double Down"Edit

Synopsis for "The Jacobian, Chapter Eight: Dead in the Water"Edit

The majority of the main story is a reproduction of a comic book written by Harvey Dent. It is part of the Bat-titles' month-long 'In This Issue: Batman Dies!' mini-event.

Retrieved from "https://heykidscomics.fandom.com/wiki/Detective_Comics_Vol_1_753?oldid=1712648"
Community content is available under CC-BY-SA unless otherwise noted.