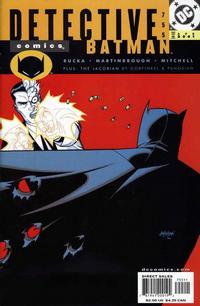 Appearing in "Here's Your Hat, What's Your Hurry?"Edit

Synopsis for "Here's Your Hat, What's Your Hurry?"Edit

Synopsis for "The Jacobian, Chapter Ten: Castle in the Sky"Edit

The Jacobian and Leelee are prisoners of the Mahmetchik, forced to help row a fantastic flying ship. When they talk too much, they are thrown into the hold, where the Jacobian finally makes the realisation that Leelee's missing husband is himself. Soon, they arrive at their destination and a young sentry tells the Jacobian to 'defend or die'.

Retrieved from "https://heykidscomics.fandom.com/wiki/Detective_Comics_Vol_1_755?oldid=1668427"
Community content is available under CC-BY-SA unless otherwise noted.