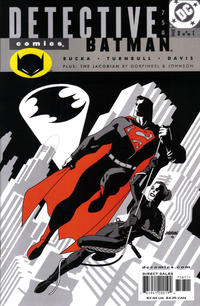 Appearing in "Lord of the Ring"Edit

Synopsis for "Lord of the Ring"Edit

Synopsis for "The Jacobian, Chapter Eleven: The Garden of Knowledge"Edit

Greeted with the option 'defend or die', The Jacobian chooses 'neither' and is admitted to the sanctuary of Gan. Here, he meets the High Priest, who tells him that his name is Adehm and his function is the Jacobian, 'all that is', with complete mastery of all knowledge and its application. The sum essence of human knowledge is safeguarded in Gan, and when the Jacobian touches it, it manifests as the Garden of Eden and here he discovers Leelee's true identity - Lilith, the insubordinate wife of Adam.

Retrieved from "https://heykidscomics.fandom.com/wiki/Detective_Comics_Vol_1_756?oldid=1668293"
Community content is available under CC-BY-SA unless otherwise noted.