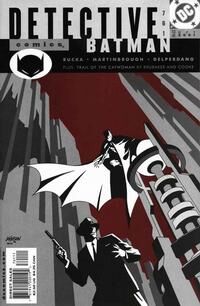 Appearing in "In Thirty Days"Edit

Synopsis for "In Thirty Days"Edit

Synopsis for "Trail of the Catwoman, Part Three"Edit

Continuing his investigations, dogged all the while by Gino from the mob, who demands answers, Slam Bradley comes to the conclusion that Selina Kyle and Catwoman are one and the same. He is surprised when wealthy Bruce Wayne refuses to discuss Selina with him and even more so when Batman tells him that Selina is not who Slam thinks she is. However, when he returns to his office, he finds that Selina is waiting for him.

Retrieved from "https://heykidscomics.fandom.com/wiki/Detective_Comics_Vol_1_761?oldid=1668602"
Community content is available under CC-BY-SA unless otherwise noted.