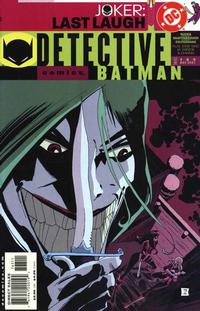 Josie Mac has always had intuitions about missing objects, objects which want to be relocated to their rightful home, but it doesn't work with people, not even her brother Raymond who has been missing since she was a child. She became a cop and started working in the anti-crime division until she made a big mistake, by crashing into a hotel room where the mayor's wife was enjoying a dalliance with an exotic dancer. The mayor's wife made very sure that Josie was transferred to Missing Persons, and she has been there less than a day when she receives a call to say that Anthony Antonelli, the grandson of one of the city's mafia bosses, has gone missing, presumed kidnapped.

Retrieved from "https://heykidscomics.fandom.com/wiki/Detective_Comics_Vol_1_763?oldid=1635272"
Community content is available under CC-BY-SA unless otherwise noted.