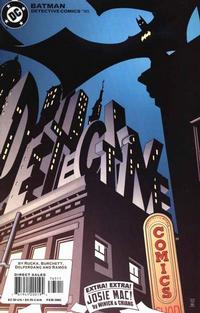 As she is returning home from the grocery store, a man attempts to shoot Josie on her doorstep. Although it seems like an attempted robbery or mugging, Josie does not really believe this, and Detective Lincoln who is on duty when she takes the man (Charley White) in, agrees - he has no history of robbery, only much less serious offences. Later, Batman turns up at her flat, and warns her to stay off the case (which he says is too dangerous, and he doesn't want good cops hurt), also revealing that he is aware of her psychic abilities. As he goes, he leaves her a Bat-branded plaster for the wound she sustained fighting off her attacker, who later commits suicide in his holding cell.

Retrieved from "https://heykidscomics.fandom.com/wiki/Detective_Comics_Vol_1_765?oldid=1635280"
Community content is available under CC-BY-SA unless otherwise noted.