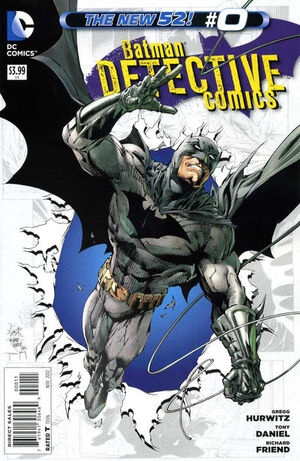 Synopsis for "The Long Wait"Edit

Seven years ago, Alfred Pennyworth had come to dread the sound of the doorbell as much as he had been filled with hope by it. His charge Bruce Wayne had been gone for some years already, and while he hoped every time that the ringing of the doorbell would mean Bruce was home, it could just as easily mean that Bruce had been found dead in whichever place he had been cavorting across the world. Still, there was further reason to dread the sound, as there were those in the city who were just as eager to find out that Bruce had died as Alfred was to hear that he had not.

In this instance, the man at the door was a Mr. Shaw, representative of the Kane family - relatives of Bruce's mother Martha. Mr. Shaw claimed that with the death of her son, the Kane family had a legal right to Martha Wayne's fortune and property. Bruce had not been heard from for years, despite rumours that he was seen in the foothills of the Himalayas, recently, and all of the money and effort that Alfred had put into locating him had come up with nothing much else.

Regardless, though, Mrs. Wayne had made a legally binding compact in her will that made Alfred the sole custodian of Wayne Manor and fortune until such time as their son could claim it for himself. The reason for this was that Mrs. Wayne knew what kind of people her father and brothers were, and she refused to let her life's work fall into their hands.

Mr. Shaw had little care for that fact, explaining that Mr. Kane would be kind enough to set Alfred up with a small fortune, and an opening with the Gotham Shakespeare Company as an actor in exchange for his compliance. If, however, Alfred refused, they would use their considerable resources to ruin him completely. Angrily, Alfred thrust Mr. Shaw up against the wall, warning that if he did not leave Wayne Manor immediately, he would learn just how disagreeable he could become.

Mr. Shaw ran away, leaving Alfred to worry after Bruce's fate. However, it was not long before he heard the doorbell again. Thinking Shaw had returned, Alfred shouted for him to go away again, but on opening the door, he was met with a surprise. Bruce had returned.

Bruce embraced his old friend, and promised to tell all about his travels soon. He begged forgiveness for going so long without giving him any word, and then noticed all of the newspaper clippings and maps laid out on the floor of the manor. He realized that Alfred had never given up searching for him. Happily, he decided it was time to tell his long story, and present him with an idea that could change everything for them.

Retrieved from "https://heykidscomics.fandom.com/wiki/Detective_Comics_Vol_2_0?oldid=1660374"
Community content is available under CC-BY-SA unless otherwise noted.