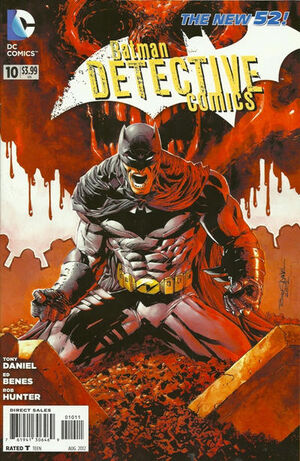 Appearing in "On the Brink"Edit

Synopsis for "On the Brink"Edit

Synopsis for "The Big Fall"Edit

Harvey Dent is given a rude awakening via a bucket of cold water as he lies bound on the floor of a darkened warehouse. A man who is referred to only as the Leader explains that he is doing his part to rid the world of evil, one man at a time - and the time for Harvey Dent's reckoning is at hand. But when the Leader sets his hands on Harvey, he is taken aback by just how much light still lives within the man who is now called Two-Face.

The Leader takes Harvey under his wing, and for a week he works to bring out Harvey's light side. Harvey himself begins to feel like a normal person; one of the group. However, the feeling cannot last. After just one week, he wakes in the same manner as he had on his arrival. The Leader returns his coin and urges Harvey to go and find his own way of fighting his demons. He cannot help him anymore.

Meanwhile, the people who conspired to have Harvey Dent killed by the Leader are worried that he may still return. The Leader is known to kill those infested with darkness, but if Two-Face is still alive, Tommy and Dominic Sterano will have a full-scale gang-war on their hands. Regardless, Sterano has already informed Two-Face's associates that their boss won't be around anymore, so if he is alive, he will find himself without friends. Sterano and Tommy are interrupted by the appearance of Tommy's girl Lydia, who managed to get past security, somehow.

She got past security because Two-Face killed them, and he bursts into the room, crushing Lydia under the unhinged door. Now, he's come for revenge.

Retrieved from "https://heykidscomics.fandom.com/wiki/Detective_Comics_Vol_2_10?oldid=1660371"
Community content is available under CC-BY-SA unless otherwise noted.