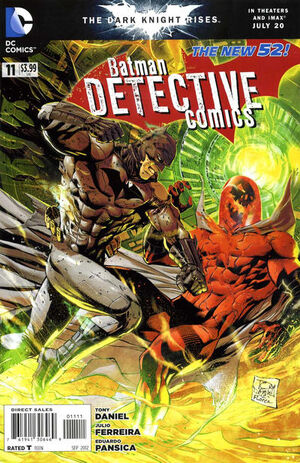 There to get revenge, Two-Face breaks into Freakshow Tommy and Dominic Sterano's hideout, guns blazing. Despite getting shot himself, he kills both of them.

Some time later, Two-Face collapses at the door of the Leader, who had sent him away days before after trying and failing to curb the evil in Harvey Dent's heart for good. Regardless, the Leader takes Harvey in again, to save his life.

Harvey wakes in a darkened room, incredulous that his life was saved. The Leader was hired by Tommy and Sterano to kill him, and yet his moral code prevented him from doing so. Two-Face points out that this is the second time the Leader has failed to kill him, and he doesn't take lightly the fact that the Leader sent him back to Tommy and Dominic expecting them to do the job themselves. The Leader warns that he is merely a bump in the road for Harvey Dent. It is up to Harvey where that road goes. Being made up of equal parts light and dark means that whatever choice Harvey makes will tip the scales to one side or the other.

Harvey knows that all to well, and he flips his coin. He follows the results of his coin-tosses without question, and acts according to whichever side of the scale is tipped. Looking at the flipped coin in his palm, Two-Face lifts raises his gun without hesitation and puts a bullet in the Leader.

Strangely, the man is gone, and all that is left behind is the Leader's robe - with a bullet hole burnt through it. Somehow, the Leader has cheated the coin; cheated death.

Retrieved from "https://heykidscomics.fandom.com/wiki/Detective_Comics_Vol_2_11?oldid=1660372"
Community content is available under CC-BY-SA unless otherwise noted.