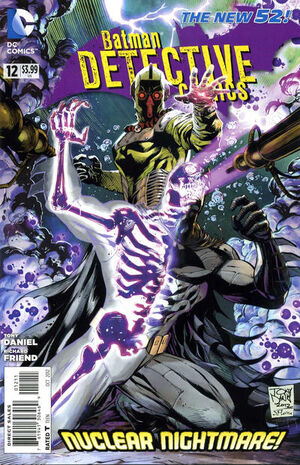 Appearing in "The Killer Inside"Edit

Synopsis for "The Killer Inside"Edit

Synopsis for "The Tell-Tale Face"Edit

Sgt. Harvey Bullock has been tasked with training a rookie named Nancy in guarding the evidence room where the Joker's detached face is being kept. This is Nancy's first night on the job in Gotham, having just transferred.

Harvey tells of how her predecessor had worked the evidence room for eight years, and then asked for a transfer just one night after the face had been added. He tells another story of how a cop he once knew had a nervous habit of whistling "The Farmer in the Dell" over and over. One night, he had had to take the Joker back to Arkham Asylum, and was so nervous that he whistled the song the whole way there. After the Joker's next escape, he found that cop's apartment, killed his wife, and after strapping him to the chair, demanded that he whistle the song again. The cop was so scared and sad that he couldn't even put his lips into the right shape to whistle. So, the Joker cut a whistle out of the cop's finger bones, and then played the song over and over until he bled to death. Bullock claims that the Joker had told him the story himself, and had showed him the whistle. After this, Harvey leaves Nancy alone with the face.

Nancy turns the face away from her, and spends some time filling out paperwork. She naps for a few hours, until she is wakened by a sound. She convinces herself that it was nothing, but a sudden burst of laughter from the direction of the face knocks her off her chair, screaming. Cautiously, she steps toward the box, assuring herself that it's just a bunch of dead skin - albeit the skin of someone who murdered hundreds of people.

Curiously, she opens the case, and holds the face in her hands. Suddenly, it begins laughing maniacally again, and in horror, she thrusts it away from her, curling up on the floor and assuring herself that this is all just in her head. She opens her eyes, and spots something attached to the face.

Angrily, Nancy marches upstairs and yells out for Bullock. He looks up in time to take her fist in the jaw. She angrily accuses him of taping an audio player to the back of the face. He claims he was just trying to have some fun, but she warns that if that face laughs again after she goes back to work, she will report him.

On the street nearby, the Joker decides that it's time to retrieve his face.

Retrieved from "https://heykidscomics.fandom.com/wiki/Detective_Comics_Vol_2_12?oldid=1660373"
Community content is available under CC-BY-SA unless otherwise noted.