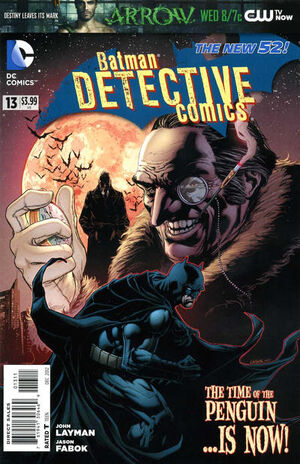 Appearing in "Duck and Cover"Edit

Synopsis for "Duck and Cover"Edit

Martin arrives in Gotham City from Miami, to run with the Penguin's gang. He is accompanied on his first job by Ogilvy, who has been in Gotham's criminal underground long enough to have no illusions about the reality of the Batman. He warns that they should keep the job simple and low profile, to avoid the Batman's attention.

Ogilvy tells of how he first met the Batman, and the vigilante took out his entire operation, dodging and taking bullets like it was nothing. When he was done, he found Ogilvy shivering in a corner and frightened. The Batman simply told him to stay out of trouble; a threat, not advice.

While Ogilvy hacks the computers, Martin is tasked with blowing the safe. Instead, Martin used his smarts to figure out what model the safe was in advance, and cracked it without the need for explosives. Realizing just how smart Martin is, Ogilvy shoots him in the head. People who are too smart are competition. Martin showed his cards too soon, and that was a dumb move.

Retrieved from "https://heykidscomics.fandom.com/wiki/Detective_Comics_Vol_2_13?oldid=1660375"
Community content is available under CC-BY-SA unless otherwise noted.