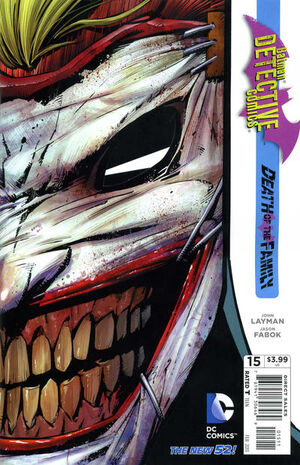 Appearing in "The Dirt Nap"Edit

Synopsis for "The Dirt Nap"Edit

Synopsis for "Love in Bloom"Edit

Some time ago, Clayface received a letter in his cell at Arkham Asylum. This is just one of many letters he has received over the last while from Poison Ivy - all of them love letters. The more he received, the better he felt. One day, Ivy appeared in his cell with intent to spring him out. They were going to get out and get hitched.

Now that he's been freed from her manipulations, Clayface feels betrayed, though still nostalgic for the way the letters made him feel. Because he and Ivy had planned to rendezvous that night outside of town, he waits for her in the seedy motel room. Ivy arrives, finally, having been delayed by her premature burial. With the Joker back in Gotham City, she has decided that it would be best to leave, but Clayface insists that they stay. This is perplexing to Ivy, because he is not supposed to defy her. Too late, she realizes that he is no longer under her control, and has come for revenge.

Retrieved from "https://heykidscomics.fandom.com/wiki/Detective_Comics_Vol_2_15?oldid=1660377"
Community content is available under CC-BY-SA unless otherwise noted.