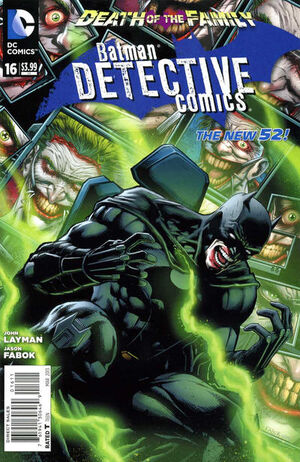 Appearing in "Nothin' But Smiles"Edit

Synopsis for "Nothin' But Smiles"Edit

Earlier this week, Ogilvy checked in at a crime scene, where the Joker killed lieutenants from nearly every Gotham City crime family, pinning it on the Penguin. The scene is so horrifying as to cause one GCPD officer to give up his badge on the spot. With the Penguin taken by the Joker to participate in whatever his big future plan was, Ogilvy got some ideas.

Retaliation for those murders led to more bloodshed, and eventually Penguin's partners in crime came to beg for some kind of solution to the gang wars. Ogilvy stood in Penguin's place, claiming to have a solution. He rechristens himself as Emperor Penguin, a more effective replacement for Cobblepot. He would assume command, under the assumption that his predecessor would not be returning. With the GCPD, Batman, and the Penguin distracted, they will kill all of their enemies, and blame it on the Joker. One man, Mr. Foschini, refuses to participate, and so Emperor Penguin cuts a grotesque grin onto his face with a laser-umbrella, killing him. Nervously, the remaining assembled criminals agree to do whatever the new Penguin suggests.

Retrieved from "https://heykidscomics.fandom.com/wiki/Detective_Comics_Vol_2_16?oldid=1660378"
Community content is available under CC-BY-SA unless otherwise noted.