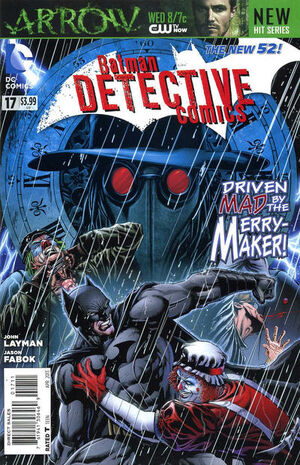 Appearing in "The Pursuit of Happiness"Edit

Synopsis for "The Pursuit of Happiness"Edit

Dr. Merideth recalls the first time he met the Joker. It was in Arkham Asylum some time ago. While, multiple doctors tried to diagnose the madman, each one was scared away by his insanity. Only two of the doctors were able to stomach him: Merideth himself, and Dr. Harleen Quinzel.

Now, Merideth is seated for his own psychiatric evaluation as a criminal, where he is questioned by one of his old colleagues, who tries to understand his psychology. The former doctor explains how he had given his notice of resignation the very next day after meeting the Joker, because he had seen the look of adoration and inspiration on Dr. Quinzel's face, and he had understood the influence that the Joker has. For normal people, the Joker inspires fear, but for the unstable, he merely inspires. He had seen as a doctor at Arkham how others had tried to emulate the Joker's behaviour. So, he had quit his work at the asylum and started a private practice in order to profit from that understanding.

After hearing so many sob-stories, every time the Joker resurfaced, Merideth came to decide that these people could not be rehabilitated - but they could certainly be manipulated. That was how he came to create the Merrymaker. He then began the League of Smiles, and was later thwarted by Batman, leading to his being in this office, explaining himself.

Musing about his tenure as a doctor there, Merideth remarks that Gotham City's criminals are among the only in the world who don't want to be found insane at trial, because they don't want to end up at Arkham. He prods his old colleague, hoping he can get a nice cell at Blackgate Penitentiary. Unfortunately, this doctor has no intention of sending him there. In fact, he decides - without any concern for accuracy - that Merideth is a sociopath who needs psychiatric help. Declaring him insane, he has Merideth carted off to the institution where he once worked.

Alone in his office, the psychiatrist begins doodling drawings of the Joker onto his pad - and had in fact been doing so during the duration of the interview, indicating his own unhealthy obsession with the madman.

Retrieved from "https://heykidscomics.fandom.com/wiki/Detective_Comics_Vol_2_17?oldid=1660379"
Community content is available under CC-BY-SA unless otherwise noted.