Start a Wiki
Part of the 'Batman: Requiem' event 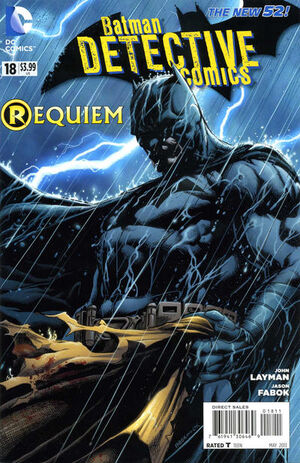 Appearing in "Return to Roost"Edit

Synopsis for "Return to Roost"Edit

Synopsis for "A Cut Above"Edit

During the Joker's reign in Arkham Asylum, Victor Zsasz finds himself able to satisfy his ongoing need to kill - and his need to record those murders by making a cut into his own skin. In the melee of the asylum's outbreak, Zsasz spots the Penguin, and is forced into a memory.

He once had been gambling at the Iceberg Casino, and his streak of bad luck had thus far caused him to nearly lose the entirety of the fortune he inherited from his parents' successful Zsasz Industries - which the Penguin was eager to facilitate. When the man has lost everything, even his own assets, the Penguin threw him out. When he had begged for some kind of mercy, Cobblepot simply told him "that's life," and suggested that he kill himself.

Now, Zsasz corners the man who ruined him, and relishes the thought of being able to take everything away from him. Before he can claim the Penguin's life, the Joker appears and warns that he still has plans for the Penguin. Instead, he suggests that Zsasz go out into Gotham City and do what he does best.

Ogilvy, meanwhile, spotted Zsasz escaping, and approaches him in the street, offering him the gift of a nearly two-hundred-year-old knife. He explains that they both have a desire to hurt Oswald Cobblepot, and he can facilitate that. Grinning, Zsasz takes the blade as his own.

Retrieved from "https://heykidscomics.fandom.com/wiki/Detective_Comics_Vol_2_18?oldid=1660380"
Community content is available under CC-BY-SA unless otherwise noted.