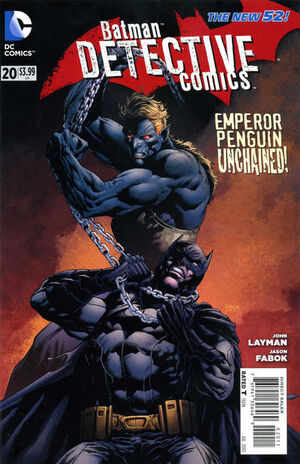 Appearing in "King for a Day"Edit

Synopsis for "King for a Day"Edit

Synopsis for "Empire of the Son"Edit

Years ago, Ignatius Ogilvy's parents had been murdered outside the Monarch Theater in much the same way as the Wayne's had.

Now, Ogilvy is an inmate at Blackgate Penitentiary, when a guard drags him away to see the "boss". As it turns out, the boss is not the prison warden, but another prisoner who has the appearance of a bull. He sends the guard away, and demands to know why he chose to become Emperor Penguin. Ogilvy explains that his father Ed Ogilvy had been a small-time crook some time ago. He had been loyal to his employers, but was murdered in the process of a business negotiation.

After his father's death, Ignatius worked his way to becoming one of the Penguin's top lieutenants, and eventually, his right hand man. While his father had never rocked the boat, Ignatius had seen how that worked out for him, and decided to own the boat. His host points out that rocking the boat didn't get him much further than his father got, seeing as he's in a maximum security prison.

The Boss explains that there is a power structure in Blackgate; a hierarchy. In order to fit into that hierarchy, he will have to be okay with working under him. Ogilvy declines his offer, having developed plans of his own. He springs forth, and squeezes the life from the Boss' throat, before asking to be returned to his cell. As he walks past the other cells, Ogilvy declares himself Emperor Blackgate.

Retrieved from "https://heykidscomics.fandom.com/wiki/Detective_Comics_Vol_2_20?oldid=1660382"
Community content is available under CC-BY-SA unless otherwise noted.