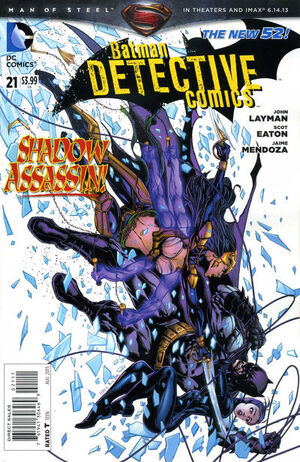 Appearing in "Shadows and Ghosts"Edit

Synopsis for "Shadows and Ghosts"Edit

After a night of fitful sleep, Kirk Langstrom is horrified to discover via a TV news report that the dreams he had might be true. A transient named Douglas King was murdered the night before by what could very likely be the Man-Bat.

Rushing away, despite his wife Francine's confusion, Kirk arrives at the New Trigate Bridge, where the police are gathered. While they are focused on the ground, he is focused on the bridge, where a swarm of bats sleeps on its underside. On the nights that he is a bat, that is where he nests. He has found himself under the bridge on numerous mornings, and it is where both he and Francine woke up when they had both taken the serum for the first time. While she appears to have been traumatized by the experience, Kirk must admit to himself that he liked it, and is becoming addicted to triggering the transformation with the serum after she has fallen asleep.

Tonight, he does it again, as usual, and though he intended to hunt for answers, he becomes engaged in a fight with a genetically modified dog. That morning, he wakes under the bridge to find the dog's body. He returns in time for breakfast, and Francine does not ask where he's been - as she never does. Another news report covers the story, but it mentions that the dog had escaped from its holding facility the previous afternoon. This triggers a worry in Kirk, because, if the dog escaped yesterday afternoon, and the man was killed the night before, there is a possibility that he did murder him. But if he did, why can't he remember? How can he stop?

Retrieved from "https://heykidscomics.fandom.com/wiki/Detective_Comics_Vol_2_21?oldid=1660383"
Community content is available under CC-BY-SA unless otherwise noted.