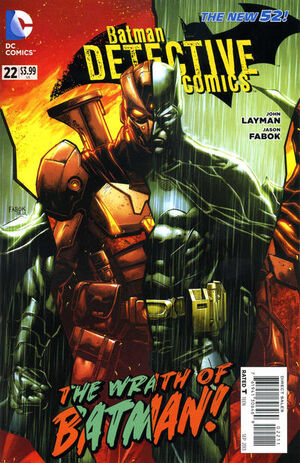 Appearing in "Targeting the Shield"Edit

Synopsis for "Targeting the Shield"Edit

Synopsis for "My Better Half"Edit

After an unsettling experience where he transformed into the Man-Bat without the aid of his serum, Kirk Langstrom dumped out the remains of his formula, hoping that it would do some good. However, now that he is without his life's work, he feels an increasing disinterest with his life. His job lacks excitement, and his wife, Francine has barely been able to look him in the eye since she took the serum herself.

To occupy himself, Kirk studies the way in which his body was physically affected by his psychological addiction to the serum. Unfortunately, his struggles to deal with the remains of the serum in his system, Kirk's coworkers begin to become suspicious. This is compounded by a visit to the lab from Lt. Harvey Bullock, who asks him to come to the station to answer questions about some bodies he's found.

Bullock explains that there have been eight murders - the apparent work of some kind of creature that appears to be a giant bat. The Batman confirmed as much. Given Langstrom's prior involvement with giant bats, and his hand in creating the serum in the first place, Bullock demands a solid alibi. He gives Kirk a moment to think on it, but returns soon with news that Francine has given an alibi for him. She presents evidence showing that neither of them was unaccounted for during the times of the murders.

However, Kirk knew they had not done any of those things, and that night, he snuck out as himself, to peek at Francine's files. As it turned out, her experiments had deviated from his. While he had used a certain species as only a control group, she had based her entire formula on the Lasionycteris Desmodontidae; a rare South American bat with a highly aggressive disposition - which also happens to be vampiric.

Retrieved from "https://heykidscomics.fandom.com/wiki/Detective_Comics_Vol_2_22?oldid=1660384"
Community content is available under CC-BY-SA unless otherwise noted.