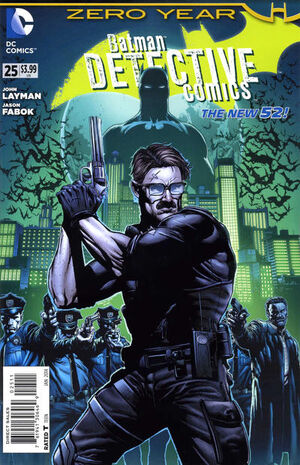 Today, Commissioner Jim Gordon and Officer Henry Wallace are called to investigate an apparent suicide from the New Trigate Bridge, but the Commissioner is unconvinced that it is a genuine suicide. Witnesses had heard the sound of hundreds of flapping wings as the body was torn to pieces in the air. It was nothing but a skeleton, by the time the victim hit the ground.

Wallace had been injured while cordoning off the scene, as he had spotted Kirk Langstrom in the assembled crowd - apparently in bad shape. Langstrom had been raving that a woman had done it, and that it was his responsibility to stop her. Wallace had decided it would be a good idea to take Langstrom into custody when he suddenly transformed into a giant man-bat and clawed at the officer's face before flying away. Concerned at this news, Jim has Wallace come back with him to the GCPD Headquarters' roof to get some help.

Retrieved from "https://heykidscomics.fandom.com/wiki/Detective_Comics_Vol_2_25?oldid=1660391"
Community content is available under CC-BY-SA unless otherwise noted.